Some time ago my cat was ill and I was waiting for the results of a blood test. Over the next day his health deteriorated further and then during the night he went out and did not return – a very unusual occurrence.  I was extremely worried due to his ill-health and I had heard that cats sometimes go away to die.  Well two days later I thought he must be dead.

After tears I reflected on what had happened and realised that I had chosen to give him freedom and this led to these consequences.

I link active choice with awareness.  The more aware I am, the better able I am to be in a position to make choices consciously, rather than react in a habitual manner or be blind to what options there may be.

Awareness is not only “the hub of good relationships” [Sue Clayton in ‘Simply People’] but also it is the process of information gathering and sense making.

Our senses (sight, hearing, touch, smell and taste) are the channels for keeping in touch with what’s happening outside us.

Our mind is the channel for keeping in touch with what’s taking place inside us – thoughts, feelings, emotions, bodily functions – and interpreting the information from all these sources.

There is a framework that I sometimes use in coaching and people development around the topics of awareness and choice, which summarises some of this nicely.  It is the Ladder of Inference, mentioned in The Fifth Discipline Fieldbook by Peter Senge, et al (1994). 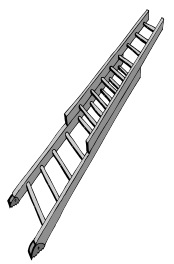 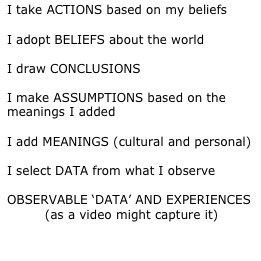 Awareness – of habits, rules and values

Remember in ‘The Resistance to Changing Working Practices’ I mentioned my habitual way of preparing runner beans.  I was not aware of this habit until another approach was suggested.  How many other situations could this be true for, both at home and at work?

Having increased my inner awareness, I had the possibility of considering other approaches.  I could choose to stay with the same approach – whatever choice I made it would be active rather than habitual.

Habits, such as particular mindsets, are choices we made in the past.  In the main I have the mindset of being half-full.  Occasionally this means that I am let down by a person, but generally speaking I benefit from this approach and I want to retain this way of being and accept the consequences, useful and hazardous!

The above example of a mindset is based on one of my values, being positive, hope-full.  Some people are not aware of all their values and the knock-on effects of such out-of-awareness values.

You probably also have rules.  These can come from a variety of sources including your values, upbringing, the company culture and/or your society’s culture.   It’s possible to spot some rules – look out for “should”, “shouldn’t”, “must”, “mustn’t”.    If someone says “can’t” it may be that s/he is not acknowledging the choice s/he has made.  For instance, “I can’t do presentations.”  Digging deeper, the subtext could be “I won’t do presentations because I believe I’m no good at that them.”  This may be based on a variety of unspoken/unrecognised reasons – e.g. a past experience, lack of self-esteem, labelling (by self or others).

Habits, mindsets, values and rules all impact the quality of your thinking, depending on how aware you are of them and how seriously you take them.  The greater your level of awareness the more active choice you have.  Mind, it doesn’t necessarily mean the quality of your decisions is better!

Oh yes, and my cat story does have a happy ending.  After giving him up for dead, my cat reappears.  With treatment – and keeping him indoors until the treatment had been completed – he is now fit and continues enjoying life!

In my next blog I will consider increasing choice and awareness.

Welcome to the ‘Valuing People’ blog


I'm Helen Harrison, My blog covers all matters about core values and how to work with them, be you a coach, consultant or trainer - and, of course, for yourself!
Having worked in the private sector in human resources (HR), and as a director within an international public company, I found that adding values into any work issue added a positive dimension to the discussion.